This Celebrity Workout Burns the Most Calories

From the Kardashian sisters to Margot Robbie, the younger generations have grown fixated on
the lifestyle of some of the hottest celebs. Obsessed with everything from their household
interior to their diets, much of the world wants to know exactly how to live like their favourite idol,
and workout routines come as no exception.
After uncovering the top 10 most popular celebrity figures amongst young women, including Kim
K, Chrissy Teigen and Beyoncé, MyVitalMetrics.com were intrigued to find out which celebrity
workout burns the most calories. To do this, we conducted our very own study* using one male,
one female, and a FitBit. Both participants completed each celebrity’s favourite workout over the
course of 2 weeks, whilst wearing a fitness tracker, to determine which routine burns the most
calories. 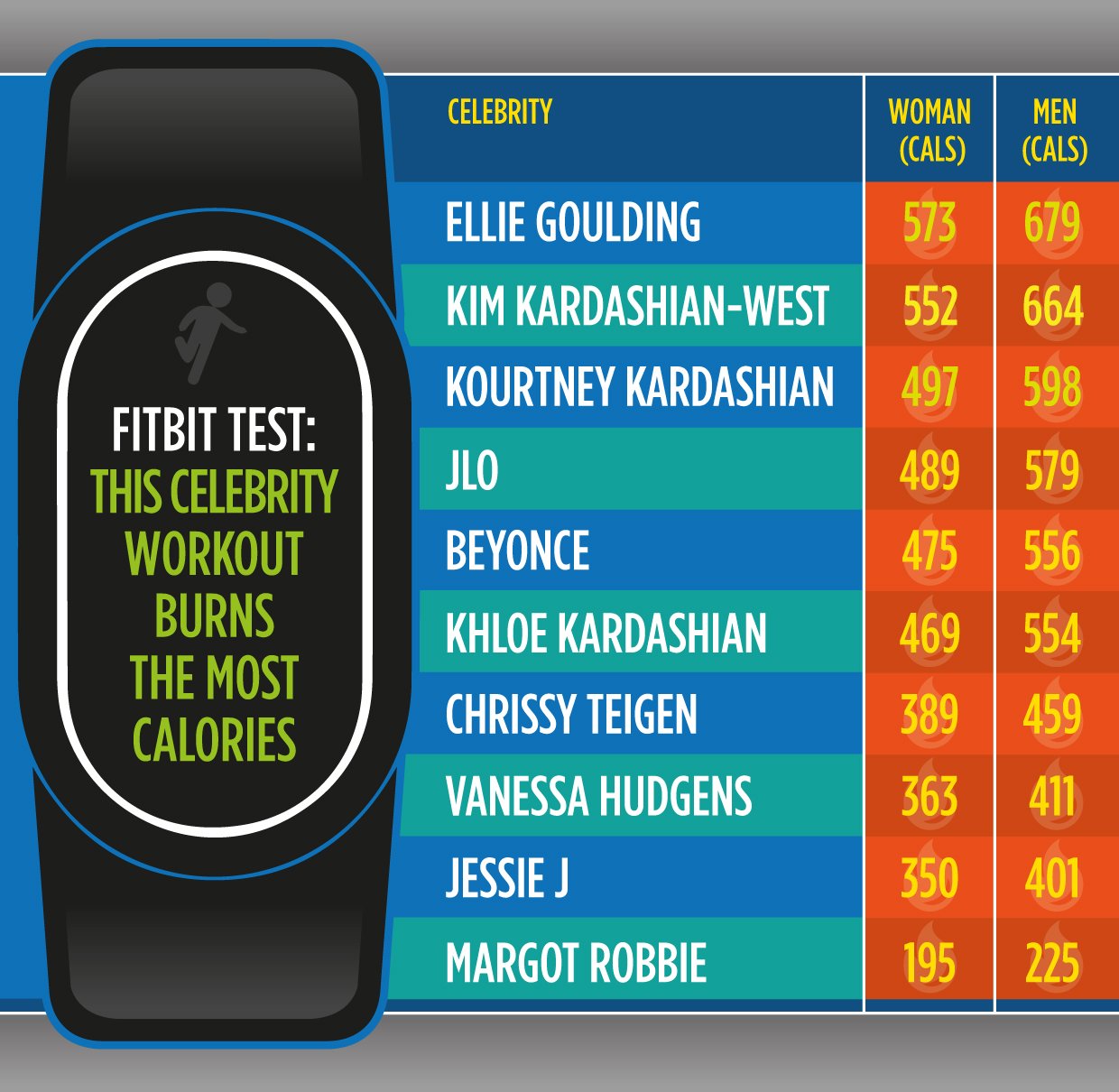 Ellie Goulding’s hour-long workout comes in first place to be crowned the top calorie burning
celebrity routine of all, burning an impressive 573 calories for women and 679 for men! Her
ambitious routine burns an average of 11 calories per minute for men and 9 for women – with
her weighted lunge proving to be among the most effective!
Ellie’s workout burned more because she has selected 6 great compound exercises for her  workout.
These exercises are overall moving more of the body’s mass through a more complex
movement than some of the other celebrity workout routines, and ultimately this will burn more
calories. Furthermore, due to the nature of Ellie’s workout, it is likely that it will go on burning
calories at a higher rate than others, as the muscle needs to repair.

Meanwhile, Kim Kardashian’s 60-minute workout was crowned the second most effective
calorie-burner, shedding a staggering average of 552 calories for women, and an estimated 644
for men.
Renowned for her famous figure, it is no surprise Kim’s workout focuses on legs, bums and
tums. The workout involves 10 minutes of each focused exercise, with 6 exercises in total. So, if
you’re a fan of forward lunges, glute bridges and squats – Kim’s workout might just be the
calorie burning fix for you!

It appears the Kardashian rivalry remains heated when it comes to celeb workouts, since
Kourtney Kardashian’s celebrity workout was hot on Kim’s heels when it came to
calorie-burning.
We found that Kourtney’s routine burned 497 calories for females, and 598 for males, with a
focus on the full body. With 6 exercises, each 10 minutes long, Kourtney’s moves burn a
competitive average of 8 calories every minute!

Placing fourth, JLO’s workout falls shortly behind that of the Kardashian sisters, burning roughly
489 calories for women and 579 for men – despite being 10 minutes shorter!
The 50-minute workout integrates 10 minutes of cardio before plunging into a routine that
includes kettlebell swings, pushups and over the shoulder taps!

Beyoncé’s full body routine ranks as the fifth best celebrity workout for calorie burning. With
exercises including crunches, lunges, punches and hops, Queen Bey’s workout burns an
impressive 475 calories for the average woman and 556 for men in just 50 minutes!

Following closely behind Beyoncé is the third Kardashian sister in the line-up: Khloe
Kardashian. Her 50-minute workout comes in sixth place, burning approximately 469 calories for
women and 554 for men.
Despite Kim and Kourtney’s workouts burning more than Khloe’s because they were 10 minutes
longer, when considering overall calories burned per minute, Khloe’s workout has the highest
burn of the three Kardashian sisters – narrowly beating Kim’s, and with Kourtney in a distant
third.

Shortly behind was former American model and social media star Chrissy Teigen, whose
40-minute workout includes tricep shredding, core strengthening, pony kicks and free running.
With these exercises, it’s no wonder her workout burns 389 calories for the average woman and
459 for the average man!

Famous for her role in the hit teen film High School Musical, Vanessa Hudgens relies on a Soul
Cycle Class for her calorie-burning fix. Our study found that her workout is certainly worthy of a
spot in the top 10 calorie-burning celeb workouts, burning 363 calories in just 45 minutes for the
average woman, and 411 for the average man.

Meanwhile, Jessie J opts for something a little more unique, with a 30-minute long martial arts
class, burning roughly 350 calories for women and 401 for men! Even though it may not be
everyone’s go-to workout, there are several benefits of martial arts including increasing flexibility
and agility, as well as toning and strengthening muscles – it’s a great all-rounder. 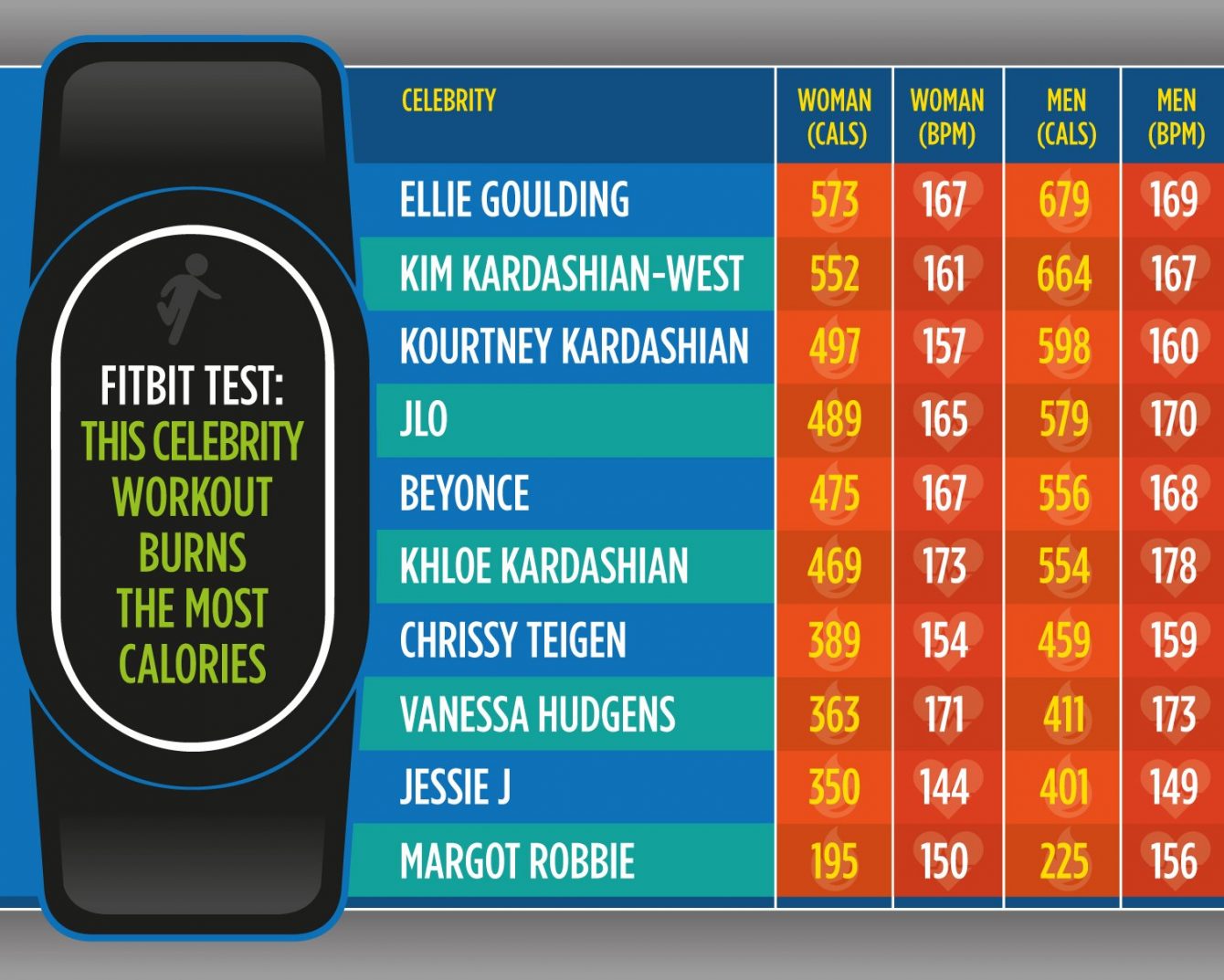 Intrigued to discover precisely which celebrity exercises were the best calorie burners, the team
at MyVitalMetrics studied each celebrity’s workout routine to identify which calorie burning
exercises are most effective.
Despite her workout coming in seventh overall, Chrissy Teigen’s ‘Core Strengthener’ exercise
proved to be the most effective calorie burning exercise, burning an impressive 115 calories
within just 10 minutes for women, and 132 for men.
Beyoncé placed second, with her ‘Explosive Lateral Bench Hops’ racking up an impressive 111
calories burned for the average woman, and 124 for men.
Ellie Goulding’s ‘Weighted Lunges’ burn a strong 108 calories for women and 125 for men,
ranking it as the third best celebrity exercise for burning calories.
Armed with the right equipment, JLO’s ‘Kettlebell Swings’ were the fourth highest calorie burner,
with 104 calories burned for the average woman in just 10 minutes, and 123 for the average
man.
In joint fifth, just behind JLO, is Ellie Goulding’s ‘Boxing Kicks’ and ‘Push Ups’, which both burn
a total of 101 calories for ladies and 119 for men.

Why do men burn more calories than women?

You may be wondering why men burned more calories than women in this study? This is
because FitBits (and most fitness trackers) use standard equations based on averages, to
calculate a person’s Basal Metabolic Rate (BMR). These equations assume that men have
more lean mass (muscle) than women even at the same overall weight, and the greater one’s
lean mass, the more calories a person burns.
For example, in this case, the 83.6kg man has a higher BMR than the 70kg woman, and so it
takes more energy to move them around and do a workout. In this case it was a fairly consistent
20-25% more calories burned. Of course, it will not always be the case that a man’s BMR is
higher as an individual’s BMR is controlled by a number of factors.
You can get a more accurate figure for your BMR either through finding out your body fat % or
even better, getting your BMR directly measured.