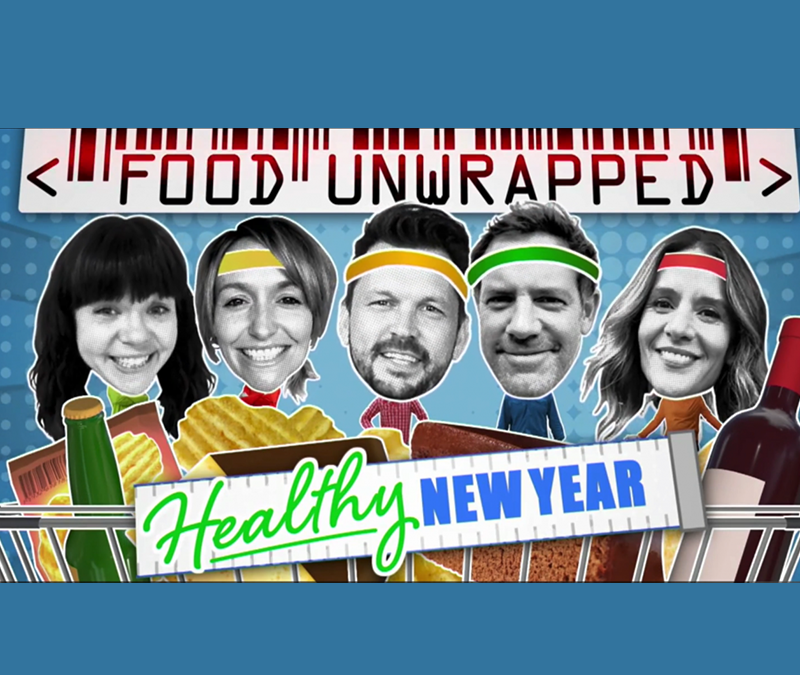 On 11th January 2021, My Vital Metrics was featured on Channel4’s programme Food Unwrapped. Together with Professor George Grimble from the Institute of Liver and digestive health at University College London, we conducted an experiment around the metabolism of alcohol in the body. The show used the advanced Spirometry devices at MVM which we usually use for the Resting Metabolic Rate Test and the VO2Max test, but in this instance they were being used to show how alcohol is prioritised in the metabolism of fuels within the body.
The experiment asked the subject, in this case the presenter Jimmy Doherty to cycle at a low intensity for 10 minutes on a cycle, while attached to advanced spirometry equipment which would measure his oxygen and carbon dioxide output. We would take this as a baseline. The subject would then consume an amount of alcohol and carbohydrate, and after 20 minutes or so we would repeat the spirometry test, and compare the results

How does the metabolism work with regard to alcohol?

Alcohol is metabolised in the body in a very similar pattern to fat. They have an almost identical Respiratory Quotient, which is the ratio of carbon dioxide exhaled to the amount of oxygen consumed. As alcohol is also toxic to the body, the body prioritises the utilisation of the alcohol calories above all over fuel sources. That this means is that we would expect that the equipment should show that the ‘fat burning’ (alcohol burning in disguise) would increase in the second test, after the alcohol was consumed.

The subject was in a moderately fasted state when we began the experiment, and you can see the fat calories and carbohydrate calories used in the graph below. This would be a fairly typical pattern of fat and carbohydrate utilisation for a person with a standard diet and under normal circumstances.

You will notice that as the intensity of the exercise increased, the amount of fat burned falls away and the amount of carbohydrate burned increases sharply. this is because the body is not able to mobilise fat as quickly as carboohydrate, so as the body needs to increase the rate of energy production, it switches fuels to carbs for the faster release of energy.

One of the things that you see in more rigourously trained individuals and athletes, is their ability to utilise fat at even very high heart rates. At MVM we have seen people who have continued to use predominantly fat as fuel right up into the 160s and 170s Heart Rate. Of course this takes years of training to achieve this. 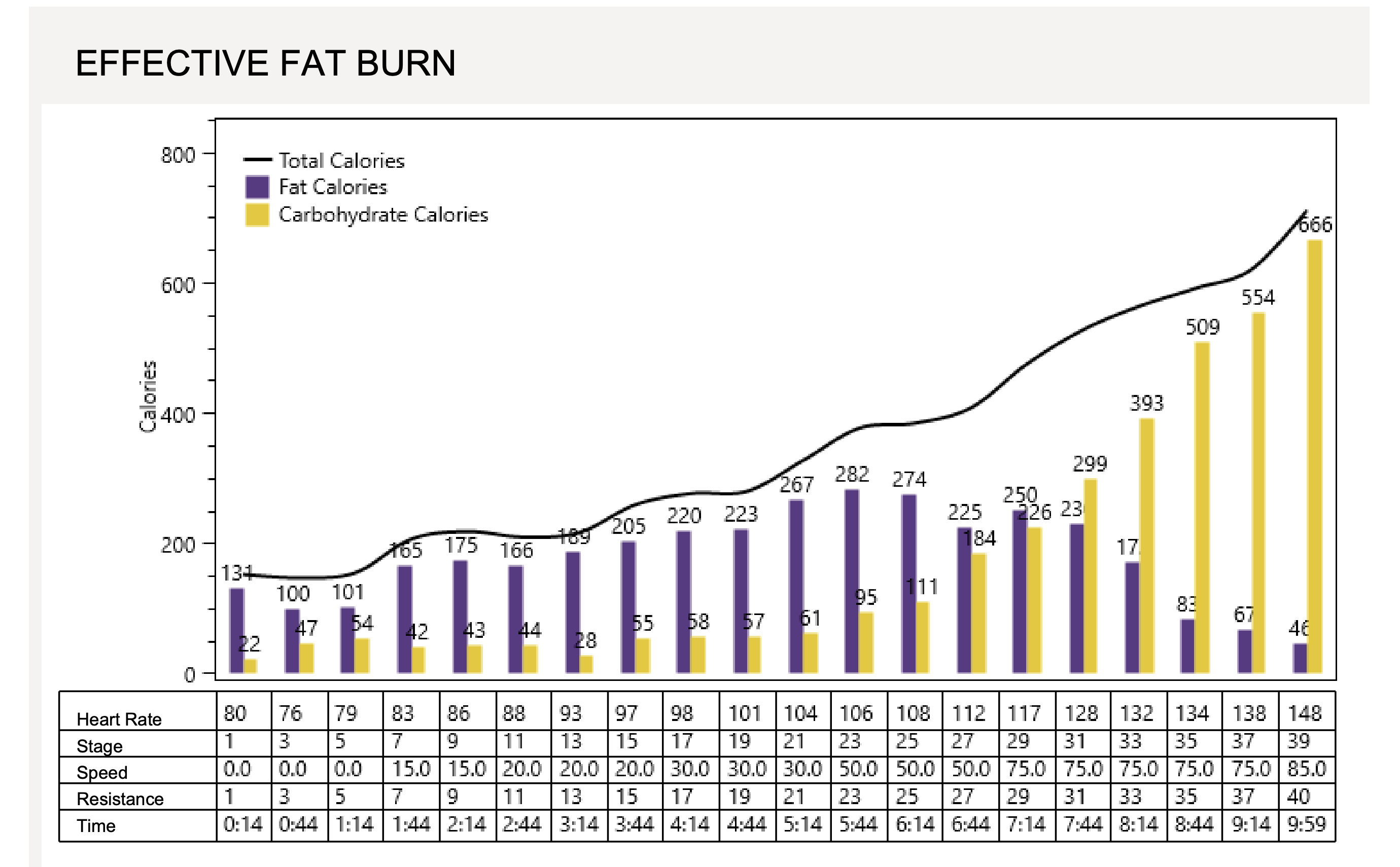 So what happened after the alcohol

After completing the first test, the subject was given a large glass of wine and a jam doughnut. While it might have been interesting to see the individual effects of these foods, we were limited by time, and strictly it we were to do that we would need to start with the subject in a fasted state each time, which would necessitate a multi-day experiment.

Regardless, the experiment done as it was, the results of the second test can be seen below. We can see exactly the result we were hoping for. Firstly, note how the total carbohydrate burn is reduced at all levels, even at the highest intensities. Secondly the carbohydrate burn is reduced to zero for some of the test – instead the results are showing that the body is getting all of its energy production from ‘fat’ according to the machine, but we know that this isn’t actually fat, but because fat and alcohol have the same RQ, this is actually alcohol being burned. 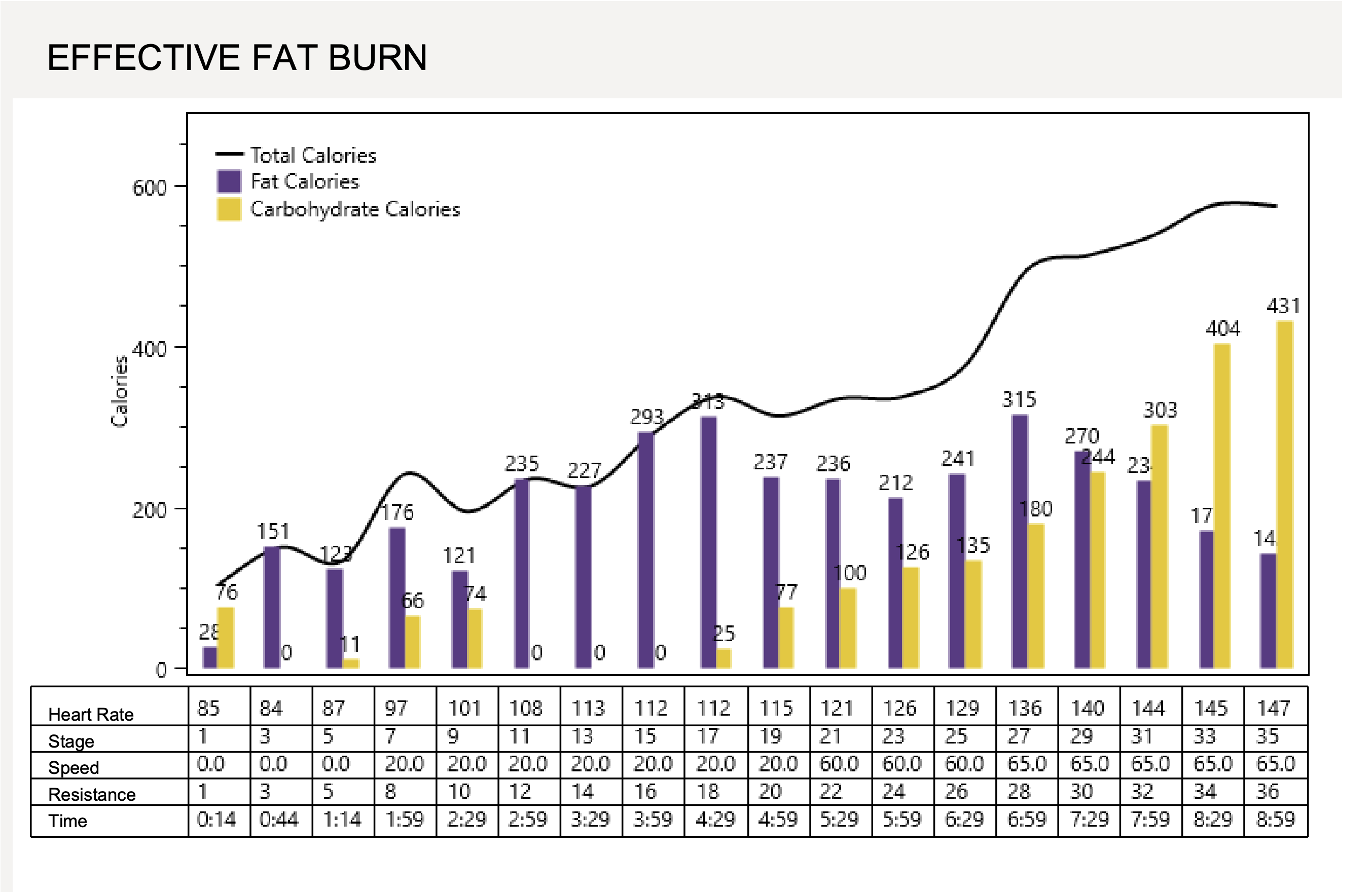 With the simple sugars which were consumed at the same time (the jam doughnut) we would expect that the carbohydrate utilisaion would have increased. However, alcohol takes priority as the body is trying to burn away the toxic effects. So instead of carbohydrates being burned, it is all alcohol (masquerading as fat on these graphs.
What this means for you in practice is that the calories from any food you consume alongside the alcohol, or indeed from any other additives you have alongside the alcohol (mixers, the non-alcohol component of beer or wine, etc) are all set aside while the body takes care of the alcohol.
If the supply of energy from the alcohol continues, then other calories will continue to be set aside, meaning they are likely to be stored as body fat.

Beyond alcohol’s potential as a high number of calories, there are other effects which alcohol has which will impact your health and fitness journey.

Firstly, while alcohol is being turned into energy, the body has to deal with ongoing high levels of glucose in the bloodstream, which will ultimately lead to a loss of insulin sensitivity, and an increase in insulin resistance. Once insulin resistance increases, the body will tend to further put on and store more fat, so its definitely to be avoided.

A second effect of alcohol is the tendency for alcohol to cause fat to be stored around the liver. This fat, called Visceral Fat, is a particularly dangerous type of fat, for a couple of reasons.

Some studies have found that this fat can actually change the hormonal profile of the liver, and cause it to generate and store more food as fat. So what can I do?

The only way to measure your visceral fat is through a DEXA. It should be noted that having a high visceral fat is completely independent of overall obesity. Many people with high visceral fat levels do not appear to be overweight or obese at all, but are still at increased risk of the above.  The DEXA will give you a figure in  grams and square centimetres. We look for a visceral fat measurement of less than 500g or 100cm2. This would set you clear of any of the risk factors above. If in doubt, or interested, please do get in touch and find out how we can help. The Incredible Life-Changing Effects of Exercise 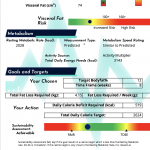 Turning a DEXA or RMR into an Action Plan 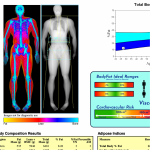 The full details of a DEXA Scan Report

Do you work in the fitness/health industry, and could use access to our equipment for your clients?

We use cookies on our website to give you the most relevant experience by remembering your preferences and repeat visits. By clicking “Accept”, you consent to the use of ALL the cookies.
Cookie settingsACCEPT
Manage consent

This website uses cookies to improve your experience while you navigate through the website. Out of these, the cookies that are categorized as necessary are stored on your browser as they are essential for the working of basic functionalities of the website. We also use third-party cookies that help us analyze and understand how you use this website. These cookies will be stored in your browser only with your consent. You also have the option to opt-out of these cookies. But opting out of some of these cookies may affect your browsing experience.
Necessary Always Enabled
Necessary cookies are absolutely essential for the website to function properly. These cookies ensure basic functionalities and security features of the website, anonymously.
Functional
Functional cookies help to perform certain functionalities like sharing the content of the website on social media platforms, collect feedbacks, and other third-party features.
Performance
Performance cookies are used to understand and analyze the key performance indexes of the website which helps in delivering a better user experience for the visitors.
Analytics
Analytical cookies are used to understand how visitors interact with the website. These cookies help provide information on metrics the number of visitors, bounce rate, traffic source, etc.
Advertisement
Advertisement cookies are used to provide visitors with relevant ads and marketing campaigns. These cookies track visitors across websites and collect information to provide customized ads.
Others
Other uncategorized cookies are those that are being analyzed and have not been classified into a category as yet.
SAVE & ACCEPT